Chainlink has been one of the best performing cryptocurrencies over the past two years, with LINK posting massive gains over the past several months with its insane momentum allowing it to set fresh all-time highs.

This momentum is showing no signs of slowing down, and analysts are now noting that LINK was just able to break out of a highly bullish technical formation, which could mean that it will see significant further gains in the near-term.

Chainlink is one of the first major altcoins to set fresh all-time highs in the course of the ongoing market-wide uptrend, and its rise may mark the start of the highly anticipated “altseason” that investors have been closely watching for.

Chainlink explodes to fresh all-time highs as “altseason” kicks off

At the time of writing, Chainlink is trading up just under 14% at its current price of $4.39, which marks a massive climb from daily lows of $3.81.

The immense bullishness of LINK’s recent rally is even clearer while looking at its year-to-date price action, with the crypto rising from lows of $1.73 that were set in the early part of the year.

Although it saw consistent gains throughout January, its uptrend turned parabolic earlier this month when it hit $2.70, with the visit to this level sparking its violent rally to its recently established all-time highs at its current price levels.

This rally has come about concurrently with meteoric uptrends seen by other major altcoins, including Ethereum and Tezos, which have both been able to post 2017-esque gains throughout the past two weeks.

Another bullish byproduct of Chainlink’s rise to all-time highs is the fact that it just broke out of a descending wedge, which could fuel even further momentum.

Bagsy, a prominent trader, spoke about the break above this wedge in a recent tweet, concisely saying that “we have liftoff” while pointing to a chart showing the crypto’s sharp movement above the upper boundary of this formation.

“LINK update: And we have lift-off.” 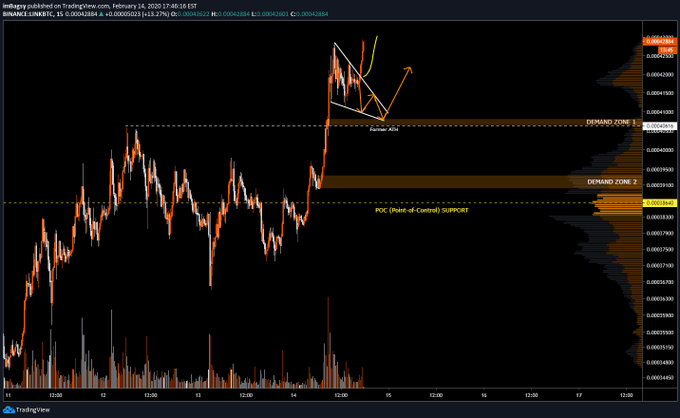 Chainlink’s immense bullishness, coupled with the strength of the entire market, seems to suggest that its insane rally won’t end anytime soon.

The post Chainlink (LINK) sets fresh all-time high, and it’s showing no signs of slowing down appeared first on CryptoSlate.